The game of darts is an interesting game that’s enjoyed by millions. It was started over a hundred years back. The first thing that comes to your mind when you talk about darts is a group of people in a pub or a bar enjoying the game. Darts is not limited to such casual public places only; it is also considered a serious business by professional dart players.

How Did it Originate?
From competitive sports to a casual pub game, dart game play is trending among all age groups. Its inception can be traced way back to the end of the 19th century; where soldiers used to aim at casks or tree trunks with short arrows, this quickly became a pastime in the battlefield.

The Record Holders!
World title championships are being held every year and many different countries have won it: but England is the exception, as they won 7 world championship titles from 1977-1991.

John Lowe is an English professional dart player and the first dart player to win the world championship title in three separate decades, and is the first player to score a nine-dart finish in a televised episode.

Playing darts is a great way to develop, challenge, and display your skills. It can help you improve your concentration, confidence, hand/eye coordination, and for some, it can be incredibly relaxing. 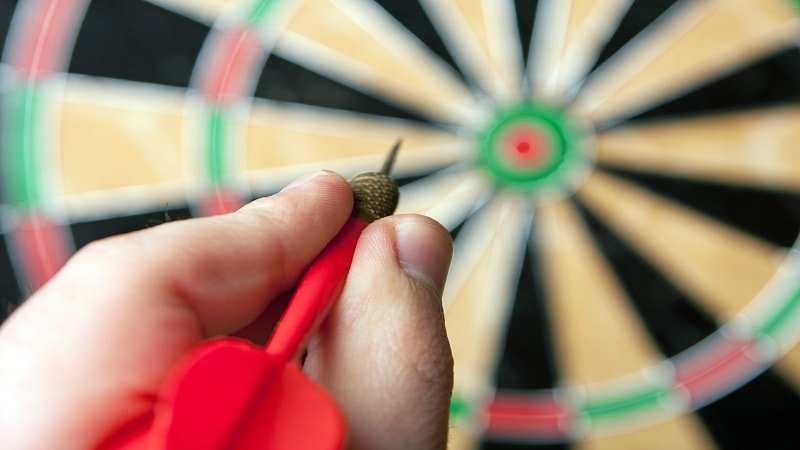 What Do You Need to Play Dart
All you need for the game is a dart board, some darts, and an opponent. The dart board should be hung at an eye-level height. Because the persons playing may vary in height, the ideal position to hang it is at 5ft. 8in (1.73m) above the floor. The oche, which is the line a throwing player must stand behind; it should be 7ft 9in (2.37m) away from the face of the board.

How It’s Played
While each player throws the dart their own way, a general rule says that they should hold the dart between the thumb and the forefinger for better accuracy and comfort. You should throw the dart keeping it at eye level, and with a smooth action. Each player has three darts and they have to throw all three one by one, each time they visit the oche.

Before starting to play, each player should be assigned a score, say 501. The aim is to get the score down to 0 in as few visits to the oche as possible. Every time a player visit the oche they should try to hit their darts on the board where it gives them the largest score, which is up to 180 points in a single round. This could be done by hitting triple twenty three times in a single visit to the dart.

In a standard format of the game, there are two ways to win. The first way is you can double out which means you have to hit a double ring and those points have to equal to whatever points you have left to make your total zero. The second way is to go all the way down to zero by subtracting your points by scoring large every time you get a throw.

12 Amazing Facts About the Game of Darts
These are some of the most amazing and interesting facts about darts:

How Darts Benefits You
Unlike other games which require more of a physical effort, dart requires a different set of physical and mental skills working in coordination with each other. It’s a challenging game that requires high level of skill, accuracy, and a steady hand. There are many positive health benefits as well, some of which are:

Buy the best darts here and start your game today!